First, local contractors mowed some areas of grass, reed, bramble and blackthorn suckers. The north end of this compartment is grass rather than reed since it’s drier, thanks to shingle washed across during a storm in the 20s. In the last few years, this grassland has been taken over by Alexanders, an umbellifer originally introduced by the Romans.

The reduction of the last big blackthorn thickets required the use of heavy machinery operated by outside contractors. The diggers should have reduced the amount of regrowth by uprooting and burning  the bushes. Some blackthorn is left alongside the road and in smaller thickets but our aim is to maintain a more diverse structure. Cleared areas will be allowed to grow up again for a few years to create new habitats but will be mown in rotation to prevent the return of intractable vegetation. 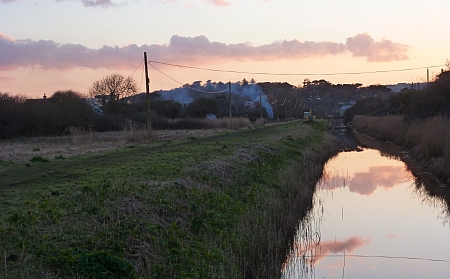 The contractors opened up a diagonal ditch which has been smothered by blackthorn for many years. Examination of old maps suggests that it had once formed part of a protective bank & ditch all the way round Toot Rock, pre-dating the early 19th century Royal Military Canal which cuts through it.

Isolated Hawthorns have been retained.

Removal of blackthorn around “Glenview” brought to light another ditch of unexpected dimensions. Now exposed to the light, these two ditches will sprout reeds and provide habitats for dragonflies & amphibians.