Part of the Openreach telephone line which runs along the seaward side of the canal sags perilously low and had become engulfed in scrub. We need these cables raised to make way for contractors to work on our land so alerted Openreach, who responded quickly to assess the […]

Historically, the thin soil over the tarmac remaining from this site has produced a flora quite different from that elsewhere on the Trust’s land. However, bramble and rough grass has begun to encroach on it. Cutting out the brambles along the fence line proved a tough job to […] 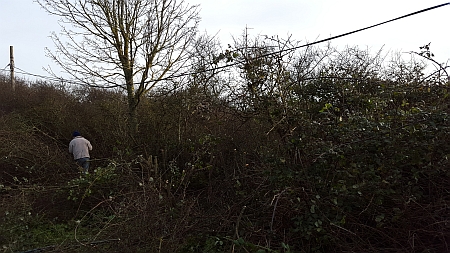 Clearing the pond – the continuing story

In January we returned to the pond area which we had begun to clear a year ago. Our intention was to remove a large fallen willow but heavy rainfall had left the water too deep to reach all of it. We managed to cut back the outer branches […]