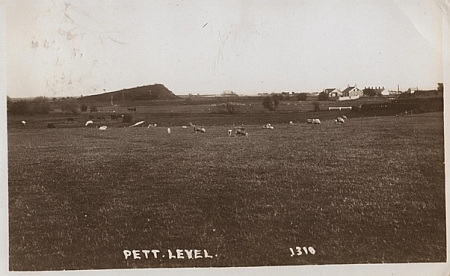 This image shows the land, now owned by the PLPT, as it was before the First World War. To the right of the picture, Toot Rock can clearly be seen jutting out from the flat land around. If you look up toot in a modern dictionary you will probably find a definition that refers to a blast from a horn. However if you look at an earlier publication, I used “The Imperial Dictionary of the English language” published in 1883, several interesting and different definitions can be found. Toot; Saxon – totian – to project, Icelandic/Norse tota or tuta – a teat or teat like protuberance, these may give us an insight into the origins of the name. References to “Toot Hills” (natural or artificially created) can be found elsewhere, it seems they may have been used as lookout points.

This 1920s image presents a good view of the Toot Rock cliff face. Much of Pett level is on low lying land; the Toot stands out quite clearly above this. 8,000 years ago the land was 40ft lower than it is today, moving on a few thousand years and the level had risen by 40ft with the area being covered by forest. At around 2,000 years ago the land was sinking again but this time the inhabitants were reclaiming it from the sea. This sheer cliff face of Ashdown sands shows that Toot Rock was eroded by tidal action. Looking at the surrounding flat land I wonder if the Toot would have once stood by itself as a small island in the sea.

This image dates to between 1912 and 1915. Sheep can be seen grazing and centrally below Toot Rock a horse drawing a two wheeled gig, like those used by the local fishermen of this time, can be seen. In the 1920s sheep were still being grazed openly but with the increased traffic of visitors and those who were colonising the area this practise was becoming hazardous. Without the sheep to keep down the overgrowth, over the years many areas became choked with dense plant growth especially around the canal banks. In recent years the PLPT has done much to open up these areas and create new paths now accessible to all.

This early 1930s image shows the water tank on top of Toot rock. This was to supply water to both the new and old coastguard cottages, the latter of which belonged to Hugh Seaton. His son, Eric, wrote about his time as a child at Pett level. Eric helped his father with filling the tank, his job was to monitor the level and make sure it did not overflow. Originally a windmill fixed to a scaffold tower (which can be seen in some earlier pictures) pumped the water up; Hugh Seaton had the pump driven from a 6hp petrol paraffin motor.

In this 1930s image a second water tank can be seen, possibly to help supply a growing population. Peter Woodroffe informed me that the source of the water was from a stream in Fairlight that had a high iron content. The households that were supplied needed filters to catch the iron deposits. Apparently this iron flavoured the water in a way that produced “A very nice cup of tea”.

The pale area in the photo above is spoil from quarrying in the 1930s, documented in the newspaper clipping below, discovered by PLPT trustee Martin King. What factors brought this enterprise to an end are not known but we can be thankful that more extensive exploitation did not take place.

Conspicuous features on the Toot are the remains of a WWII Coastal battery. A separate page on this website will eventually be dedicated to these defences which are also described in datail on this link :  http://pillbox.org.uk/blog/216544/

Extensive scrub clearance during the winters of 2016/7 has better revealed the sandstone face, below which it’s possible to make out the access ramp for quarrying in the 1930s.