When looking at old pictures of Pett level, a large hollow or depression, often filled with water, can be seen in the space between the road and the Royal Military Canal where the house Glen View now stands. The picture above dates to the early to mid-1920s it shows the depression or “pond” to have been popular with the local ducks.

In an Ordnance Survey map from 1872 this hollow can be seen as a slightly oval shape measuring around 60ft across. In the revised OS map of 1907 the hollow can now be seen as a much larger feature measuring around 200ft long by 100ft wide. This can be seen in the picture above, taken from a postcard sent in September 1910, the camp tents behind the depression help to give an idea of its size; see enlarged section below.

The high contrast in this postcard image above, dating to around 1914, gives a clear view of the irregular form of the hollow – see enlargement below.

In this postcard image that probably dates to around 1920 the hollow can be seen to be filled with water. Northwards of the larger area a clearly rectilinear shape can be seen that shows this was a deliberate and precise excavation. Below an enlarged view. 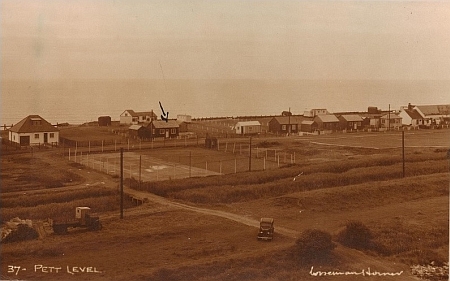 This early 1930s image from a postcard shows that there were two tennis courts side by side, one a hard surface, the other grass, the whole taking up an area of around 100 square feet. The remains of the hollow either side of the court can clearly be seen to drop away from this built up area.

In the postcard image above, taken between 1934/39, the Bungalow Glen View has been built NE of the Tennis court. SE of the courts the water filled remains of the hollow can just be seen. 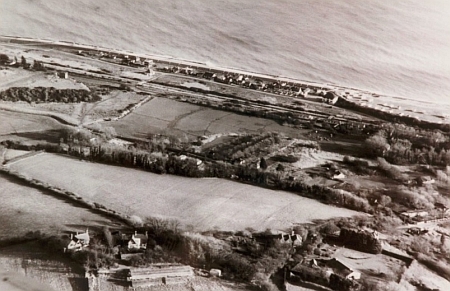 In this aerial photograph taken around 1959/60 a better view of the water filled hollow can be seen; the tennis courts have gone although the hard surface remains but covered with top soil. See enlargement below.

In this photograph, taken in 1974 from Toot Rock, some of the tennis court hard surface can be seen. The area where the remains of the hollow are located has, by this time, become completely overgrown. 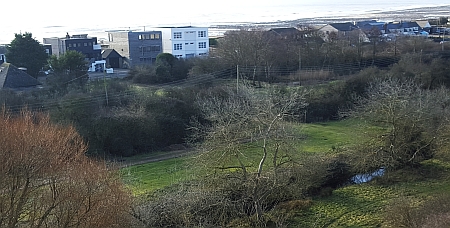 The recent work by the PLPT to clear the overgrowth has revealed the pond to still be there.

By autumn 2016, the pond is overgrown again, but now with light scrub, easier to clear